Heart pounding, legs burning, lungs heaving, eyes watering, stomach rolling, calves cramping, ass stinging, I threw myself and my bike toward the front of the rotation as the pack screamed down a straightaway on Davis Islands. It was only my third or fourth group ride with the best riders in South Florida, but the first on my new bike. And for some reason, at 30 miles per hour, I found the balls to get into rotation and sit shoulder to shoulder with dudes that can peel off a corner faster than my Honda Civic. A new bike inspires confidence, for sure, but also a bit of crazy.

For just one second, I hesitated, and almost bailed on moving up front. Was I supposed to be up here? Who did I think I was taking turns pulling on her fourth ride?

Then, from behind, I heard one of the group patriarchs scream encouragement at me. What the—?! I barely had the lungs to breathe.

And so I did. I flicked off the bitch switch and pushed pedal over pedal until I was in front of the pack, pulling a group of 40 to the end of the pitch black road, lit hazily by flickering street lights and living room lamps just starting to pop on. We still had about 45 minutes until the sun was scheduled to rise.

Just 10 seconds after I took the front, the big, strong man shouting encouragement slowly and beautifully slid in front of me. Relief and euphoria simultaneously washed over my whole body. Between open mouthed heaving breaths, I smiled.

The thing about group rides is you’ll never do what you do there in those moments, solo. I’m all about the push and the pain, but I know that before these 5 a.m. group rides—before being pulled and pushed around turns and down dark streets together in a massive group—I never would’ve hit 30+ miles per hour, or ridden 50 miles before work, or planned more weekend long rides, or got talked into switching chamois cream brands. 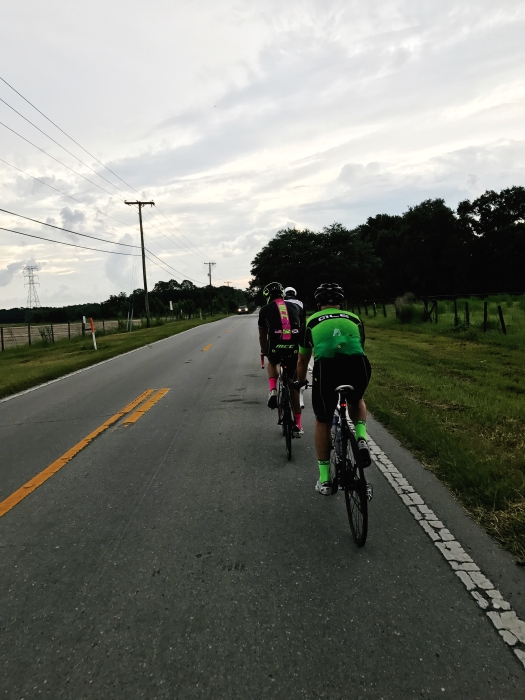 There’s a special suffer in group rides that you don’t get on solo ventures. There’s camaraderie and sarcasm and friendship.

And for so long I was that solo venturer because I didn’t believe in myself enough to even try.

I finished that group ride proud. Really, truly proud. Because, yeah, hanging with the boys is insanely badass, but all the things I did to get me to that group ride were victories. I reached out to another lady rider in the area and started tagging along on weekend rides and coffee stops. I visited a new bike shop and connected with more cyclists in town. I met my Strava buddies face to face and kudo-ed them in person. I upgraded my bike (imma keep bringing that up, so get used to it), and I showed up. I just freaking showed up for the group and for myself.

The past couple years I didn’t do any of that. And finally, when I hit rock bottom in my personal life, I decided to start digging myself back out. And taking pulls with the meanest group in town was step one.

Solo rides feel different now. They’re kind of a special thing, like when I need to turn off my brain and let my legs go to work. Or when I need to let my body dictate the pace, not my buddies.

Tomorrow, we ride again. And we suffer again. Together.