On the eve of my third race, I still haven’t written about my second. Here it is.

I realized the second cyclocross race was when I started to have expectations.

I was afraid of that.

My first race was an afternoon of blissful ignorance; my only goal was to stay upright and finish in one piece with a smile on my face. Which I did, and even came out with a second place.

But the night before this second race, as I laid my clothes out and packed my helmet and socks and extra socks, the feeling of flying across the finish line washed over me. And then on the drive to the race the next morning, I caught a glimpse of my bright red Ibis Hakka in my rearview in the backseat. Dried grass was still stuck to the down tube despite scrubbing the hell out of it the day before. It was remnants of the fun I had, and the work I put in passing other riders and shredding through the sand pits on my way to a podium spot.

I wanted to do it all again—and do it better. I wondered and worried if I could settle for anything less than another second place. I didn’t want to let myself down.

I took a few deep breaths as I pulled into the parking lot at the Dawson School in Lafayette around 8 a.m. I didn’t sleep well. I woke up before my alarm with a runny nose and a headache and wondered how my legs were going to feel that day. A few minutes later I cruised over to registration, got my number and draped my jersey over my knees to pin it on. The whole time, I realized I was doing something I didn’t do last time: I was scoping out the competition. Riders were kitted up in team jerseys and bibs, their bikes still dirty from last weekend’s race—and they’d probably stay that way until the end of the season. I was going to be dressed head to toe in black. No sponsors to be found.

Awhile later, after I’d ridden a couple laps of the course, we headed toward the start line. Then at 9:51 a.m. on the dot, our whistle blew and about 20 of us in category 5 flew off the starting line and straight toward the first punchy hill. My lungs burned almost immediately and my hands tightened around the handlebars.

The first couple laps were a blur of breathing and pedaling hard. I was still getting a feel for the course; where to break, where to accelerate, how much power it was going to take to get up the hills without walking, when to shift and how many times. This course was much different than the first but just as challenging, mentally and physically.

On lap four, I had passed a majority of the field, plus a few girls I knew were in the category above me, but I didn’t know I’d passed ALL of the girls in my category. So I kept on pedaling and picking them off as I went.

Each time I’d pass, a rider would offer me encouragement.

“But…I’m beating you,” I thought as I left each and every one in a could of dust.

I kept on, having more and more fun with each lap. I smiled when the hecklers told me to bunny hop the logs and quite coasting. I tried as hard as I could to look pro when I spotted a photographer in the grass on a turn. (Not successful.) 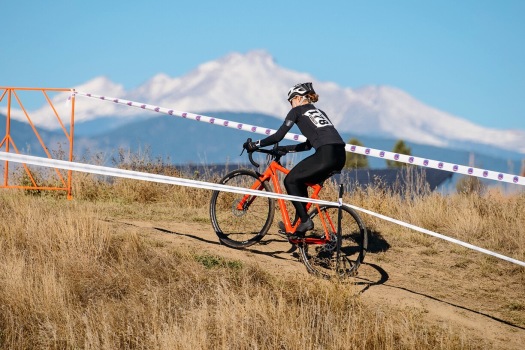 On lap 5, the final lap, I didn’t know where I was in the field, but I didn’t care. I was gassed and happy to be done. My legs were screaming, my lungs were burning, and I wanted to fall onto the fence next to me.

I heard my name called from the announcer’s booth as I blasted through the finish line, but I didn’t hear my result. I wanted a podium spot but I didn’t want to hang my happiness on it.

The day was heating up, the mid-50s weather turned into high 60s. Each wave of riders wore less and less kit as the day went on.

An hour or so later, I wandered toward the awards tent just to check on the results and what I saw was the last thing I expected that day: FIRST PLACE! I couldn’t believe it.

I couldn’t believe it and couldn’t hold it in. But when they called my name and when I stepped onto the top step of the podium it felt so real and so amazing.

^^^ I won chocolate milk. It was pretty awesome.

This crazy sport has brought me so much joy. And tomorrow I get to do it all over again.

Last night I had a dream about @sbtgrvl and riding with this crew. Can’t wait to head back to the Boat this summer! 🔥 #sbtgrvl #tbt