This camping trip happened after my long weekend in Steamboat but before my Fourth of July trip and the epic Tuesday evening bike ride, both of which I posted about before this. I’m a mess, someone plz rescue me.

But I still wanted to share about our creative offsite gathering…thing! I had such a great time and it felt like a big step for me in letting go of control—and finding small pockets of enjoyment in that.

Going through this, my inner cheerleader is all:

In the week or so leading up to this outing, I kept referring to it as “forced fun.” Like when your parents plan a family trip and you’re not old enough to just opt out and say, “Sorry, guys, I’ll catch the next one.” Because a significant amount of time and money were invested over several months planning, and your presence is expected. Same deal. My team at work is not my family, of course, and I am an adult who makes her own choices, but this camping trip was months and months in the making and I felt a responsibility to show up, especially since I’m still new here. And, also, I didn’t have an excuse.

The details were kept under wraps since time was reserved on the creative team’s calendar. About 20 of us were completely in the dark about what we were doing and where we were going. Over the next few weeks, little trinkets with clues showed up on our desks when we came to work in the morning. Things like a small stick tied to a card with toilet paper, a travel size bottle of Fireball, and eventually a compass attached to a card with the coordinates of our location. References to the TV show “Naked and Afraid” were tossed around in team meetings and, if we had knives, we were encouraged to bring them. 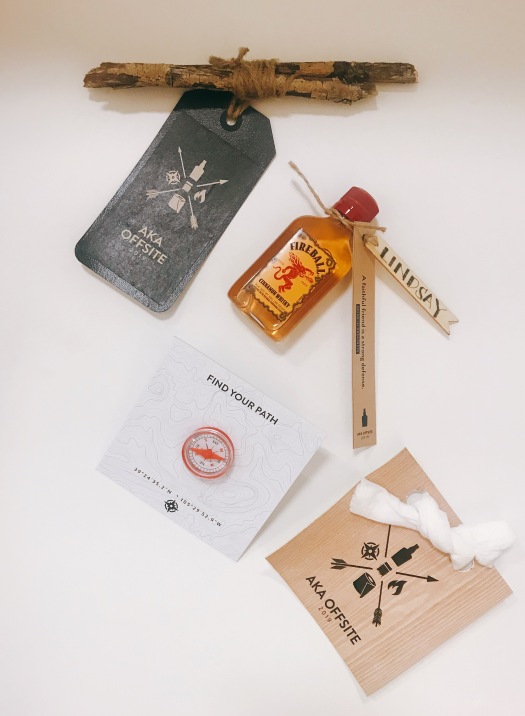 Knives? I felt so out of my element.

One day at work I plugged in the coordinates on Google Earth and it led me to Mountain Marrow, an outdoor safety and survival training company. While we still didn’t know specifics, we knew where we were going, and the knives started to make sense. In our last team meeting before the trip, more details, a more thorough packing list, and how we’d even get there as a group of over 20 people, including all our camping gear, were revealed. We’d leave at 7:30 a.m. from one of six meeting spots around Denver, there would be a quick intro from Hutch, a Mountain Marrow founder and instructor, we’d “do things” for most of the afternoon, then dinner would be served and additional optional evening activities would commence afterward. First of all, 7:30 a.m. was early since I had a long commute. Second, what does “doing things” mean exactly? Third, put me down for a hard no on the optional anything after a full day of people and no showers. So, yeah, I was hesitant.

I called my mom on the way home from work that day and told her the plans for our creative outing trip revealed to us earlier that day. “Do I have to go,”I asked rhetorically, hesitantly, pathetically. Like I was being dragged along for a boring day of errands on a beautiful summer day. “Oh my gosh, you’re just like me,”she laughed into the phone. She doesn’t like surprises, and I think maybe I inherited some of that. I can deal with contained surprises, but when someone says they have an entire day (or several days) planned out and I’m not allowed to know those plans…that’s when my guard goes up. In few words, she basically told me to suck it up and try to have fun. She was right. I put on a podcast but barely heard any of it; I tried to focus on the positives, like not working for a day and a half but still getting paid, and all the things I could control, like getting enough sleep and making sure my bags were packed ahead of time.

At 6:15 a.m. on a Thursday morning I was out the door and on my way my boss’s house, with coffee in hand. A few of us were meeting there, packing up the car, and heading into the mountains to Mountain Marrow. The trip wasn’t without a few hiccups, but the drive up highway 285 was stunning, and eventually we made it to the site around 9 a.m. 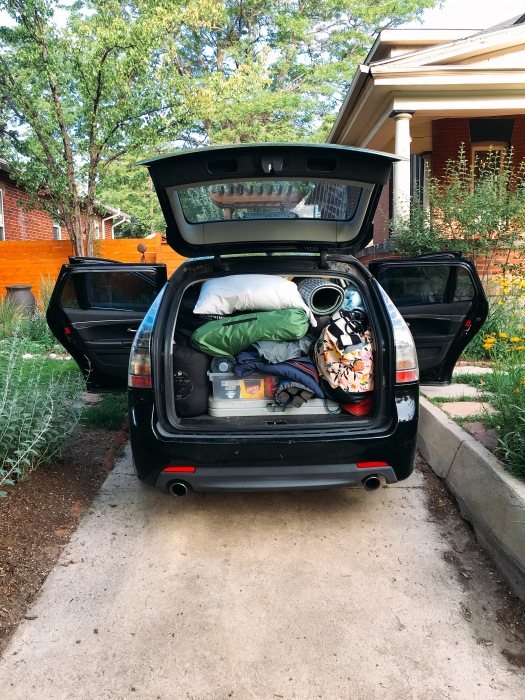 Our campsite and location for most of our afternoon activities was less rugged than I expected. It sits right on a beautiful rushing river right next highway 285, which proved to be rather difficult when it came to actually sleeping later that night.

When everyone arrived and settled in, we jumped right into our activities which included learning how to carve stakes, building temporary shelters with ropes, floss, and even bed sheets. 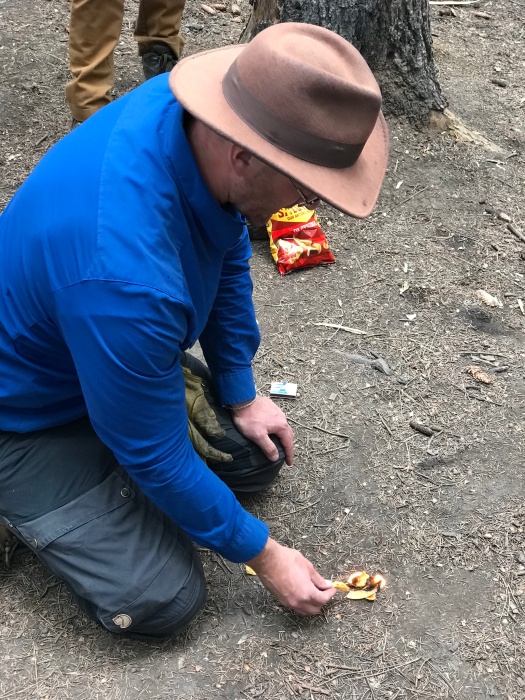 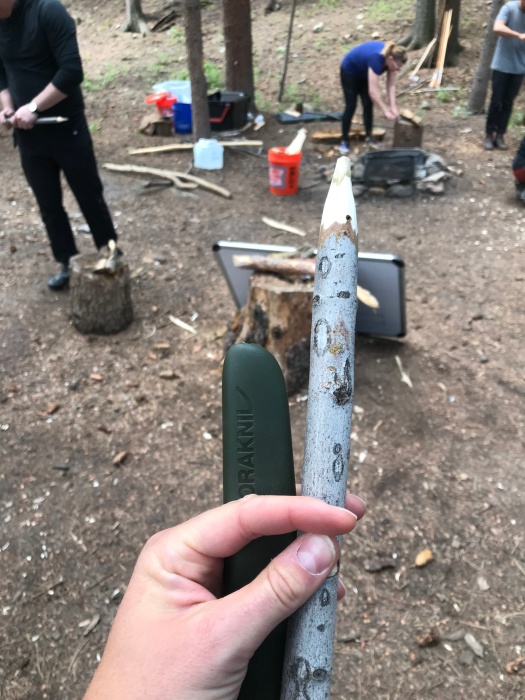 Around 12:30 p.m. we broke for a brown bag lunch which included PB&Js, apples, oranges, chips, and water from the gallon jug we were required to bring on the trip. The folding camp chairs, reusable utensils and cups, and coolers filled with ice and chilled drinks all appeared somehow out of nowhere. Everyone gathered around the picnic table covered in sandwiches and snacks and started chowing down. When I finally sat down, I realized I needed that more than I did lunch. I was exhausted and overstimulated, but actually having a great time! We also took this break to stash some drinks in the ice-cold river to enjoy at the end of the day at dinner. Watching the team figure out how to do that without losing them to the rushing water was hilarious. 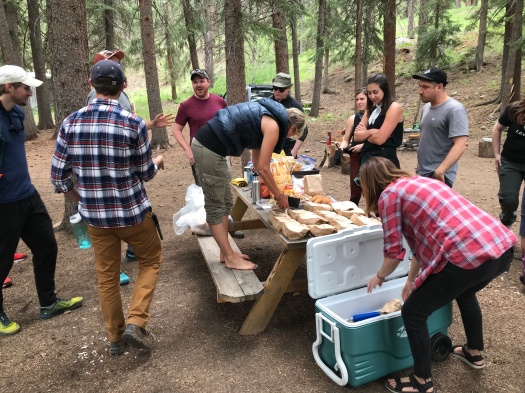 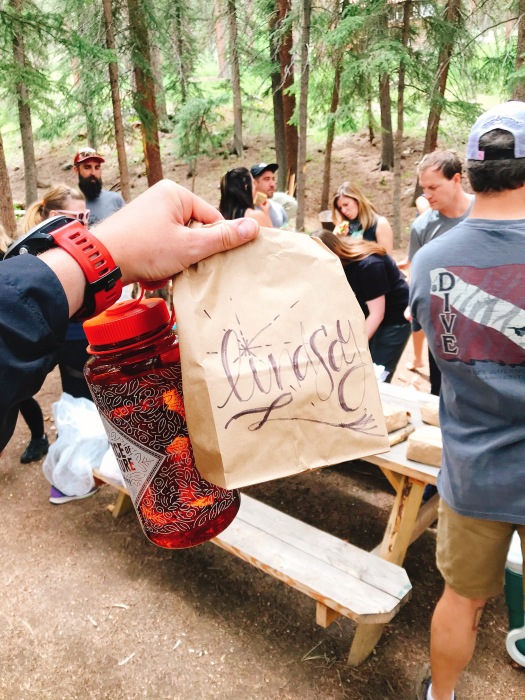 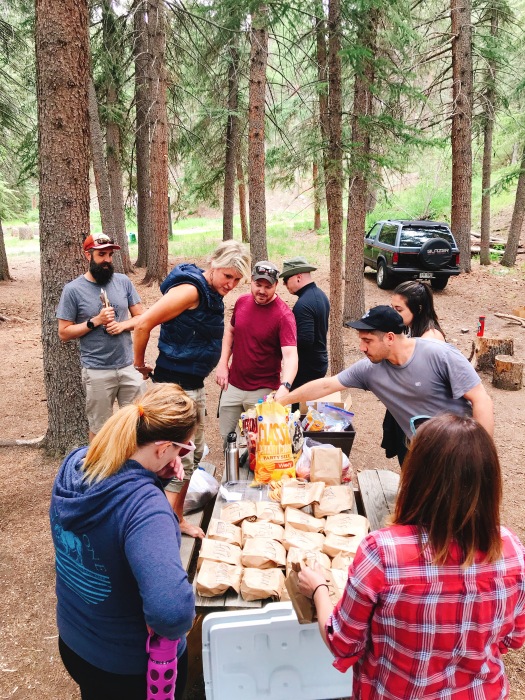 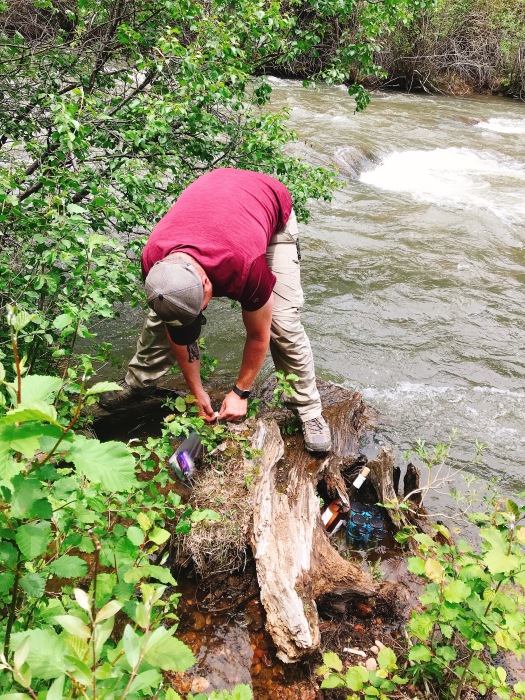 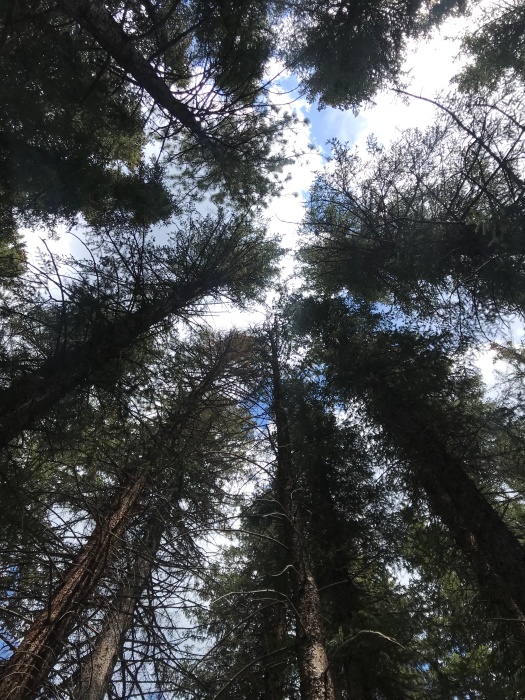 After lunch we learned some more fun skills like how to store water, boil out bacteria with hot rocks, and light a fire using a battery and a gum wrapper. Then at the end of the day we had one final competition between several teams, which was a blast. Our team did not win, but we had so much fun putting all our skills to use, and I think we were all excited to chill out after a long and hot day. 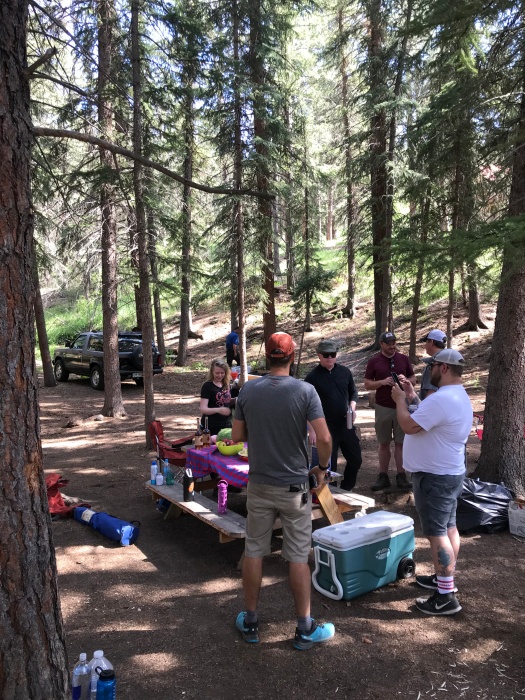 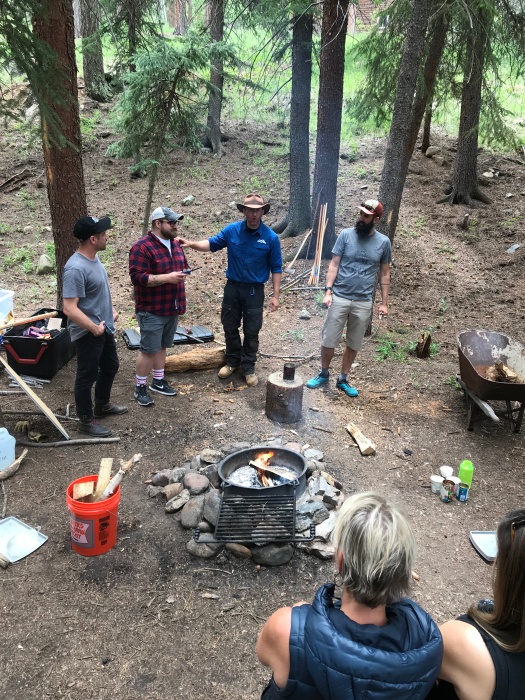 Around 6:30 p.m., a bunch of us pitched our tents and helped set out dinner that was made two days in advance by two of our co-workers and husband-wife team. It was amazing! 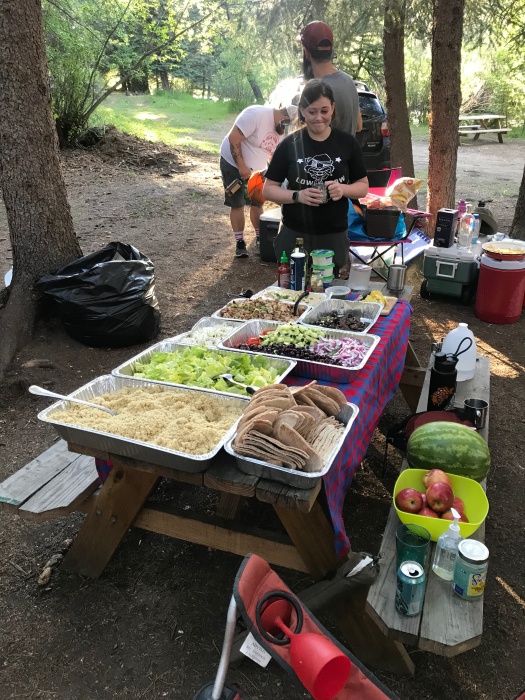 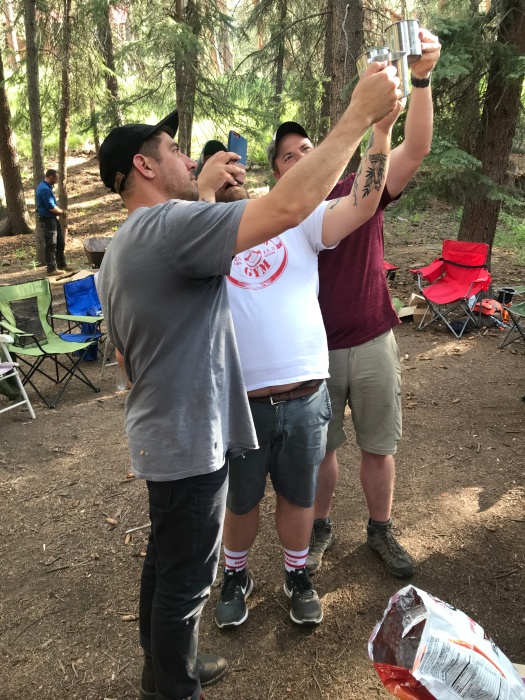 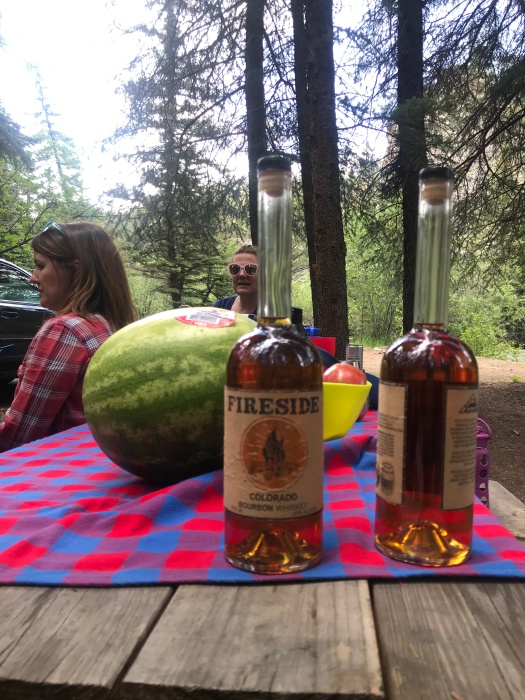 They prepared a full Greek spread complete with grilled meat, mushrooms, couscous, salad with all the toppings, hummus, pita, and dressings. They both worked so hard, especially packing it up and getting it up to our mountain retreat. I was very thankful we weren’t eating freeze-dried camp food. One plate of food turned into two and then somehow 6:30 p.m. turned into 9 p.m. and my co-workers were drunk around the fire making s’mores. I’m not drinking these days, so I got to supervise, which was just as much fun and easier to wake up the next morning.

Around 10:30 p.m., I could feel the early wake-up and the all-day activities settle into the back of my eyes, so I headed back to my tent and slid my tired bod into my sleeping bag. It. Felt. So. Good. The temperatures dropped as quickly as the sun did, so in the middle of the night I ended up putting my socks and jacket back on. 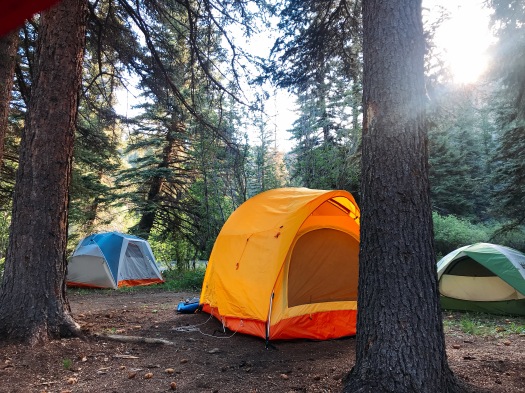 I heard some rustling happening outside around 7 a.m. and unzipped my tent to see my neighbors starting to pack up their things. I laid back down on my borrowed blow-up sleeping pad for just another minute and thought,“I did it. And it was awesome.” Though I hadn’t gotten much sleep thanks to constant traffic on the highway all night, it was a nice change to wake up in the woods. I need to go camping more.

Thirty minutes later I was packed up and back at the picnic table helping brew coffee as everyone else slowly got their things together and gathered around the breakfast of bagels and fruit. 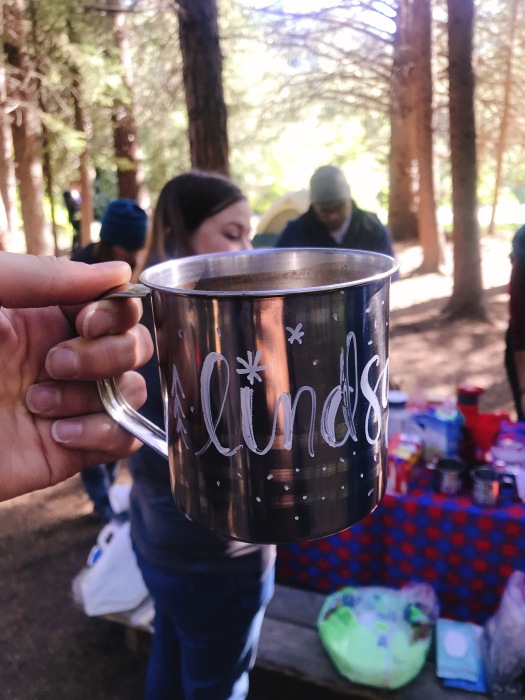 It turned out that the thing I was most worried about (not having control), was the thing I ended up loving the most during the camping trip. I didn’t have to worry about directions to/from the site or where to park, what to bring for lunch or dinner, or what I needed to pack (the full list was provided). I just kind of showed up, followed along, and participated in everything. Now, I don’t think I could do a second night because I shower twice a day every day and your girl didn’t even brush her teeth for 28 hours, so there’s that. But, for what it was, I had a fantastic time, and I learned a ton about some of my co-workers whose names I didn’t even know going into this thing. I hope we do more things like this in the future.