During the Rapha Women’s Prestige, one of my teammates and former Rapha co-workers suggested getting the OG Rapha Boulder crew together for a ride in the mountains.

I say OG crew because when I joined the café team, the clubhouse had only been open about six months. They were still working out the kinks, figuring our the flow, and slowly staffing up as the clubhouse’s business picked up. It was an exciting time of growth for everyone to be there at the beginning of something so special—at the infancy of a community that would become a staple in Boulder’s cycling culture.

“I love that idea,” I said and smiled so big when she brought it up. It’s been over a year since we all got together for a ride and we were overdue.

A group text was started a few days later. Unfortunately, the day and time only worked out for three of us, but we decided to meet up anyway and head up to Gold Hill. A second Gold Hill weekend in a row sounded brutal but, peer pressure, ya know?

Around 9:30 a.m., we all rolled into the clubhouse for a quick cup of coffee, but as we planned out our route, we started chatting with another group of Rapha riding friends, and we all decided to ride together. Twenty minutes later, our new eight-person group was on our way up Sunshine Canyon. The weather was absolutely gorgeous, and the light breeze kept us cool as we were climbing.

Sunshine doesn’t have a bike lane and the road is pretty narrow, so we filed in two by two. I took the front with Joey, my old boss, so we could catch up after a long break between seeing each other. You ever spend enough time away from old friends that you actually forget how funny they are? That’s how I felt while chatting life, liberty, and the pursuit with Joey. He has since moved on to a new job in Boulder and ridden some pretty insane races like Grinduro and Dirty Kanza’s 200-miler, which I had a great time asking him about. Not sure a 200-miler will ever be in the cards for me. Losing touch sucks, which is why I felt so thankful for this ride, even though the whole team couldn’t make it.

From Sunshine, we took a left onto Poorman, a short and fun dirt section connecting to Fourmile, which we took the rest of the way up to Gold Hill.

The group strung out a bit as it usually does on long climbs with a group with varying fitness levels, but I stuck with Laura most of the way up. When we finally reached the General Store, a popular stop for cyclists and runners, I think we were all ready for drinks and snacks! The last time I rode to Gold Hill with Laura (the weekend before), my stomach was not cooperating so I out on their epic cookies. Not this time! 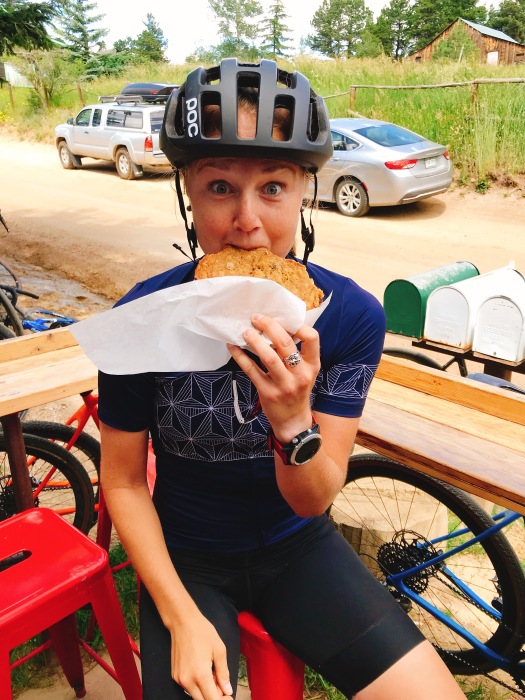 These chocolate chip cookies are unlike anything I’ve ever had. First, they’re enormous. Like, the size of a personal pan pizza and super thin with crispy edges and a surprisingly gooey center. Borderline undercooked in the most perfect way. They’re sweet, too, but also the perfect amount of salty in a way that the body craves after the seemingly never-ending ascent to the store. I, reluctantly, shared a few pieces because I’m a good friend, but I quickly housed the rest and chugged down two bottles of some delicious electrolyte drink I’m blanking on the name of right now. Another famous Gold Hill treat is pie! They make epic deep dish varieties. Laura went for a slice of berry something and I was majorly jealous. I will be back for a slice of that real soon, don’t you worry.

Our big group took over half the porch just hanging out, refueling, chugging icy cold drinks, and chatting with some other riders coming and going.

With full and happy bellies, we headed back down into town the same way we came: a little pavement, a little dirt, and a super fun descent down Sunshine on the last half. 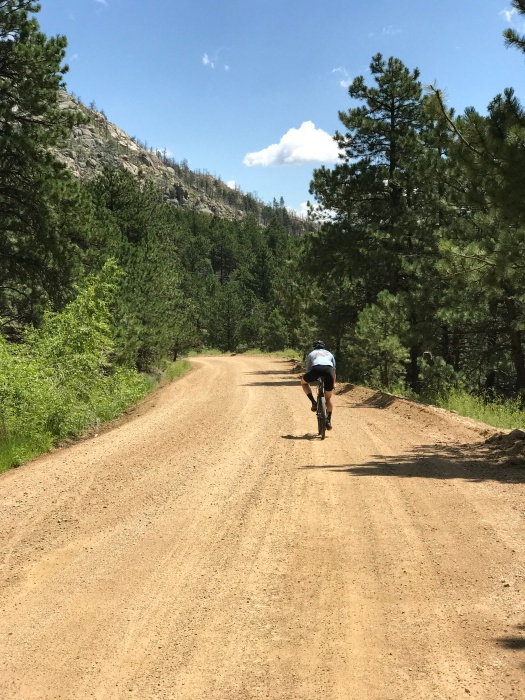 While I wasn’t off the front the whole time—or even some of the time—I felt really good. I felt strong, which was a nice change after wondering where my fitness went and if it would ever return. I thought maybe, just maybe, I could take on Steamboat Gravel and have a lot of fun doing it.

Side note but something that’s been on my brain for the last month: #CROSSISCOMING

Cyclocross season is just a month away and I’m so ready I could scream. I’ve got my license and all my races picked out. My parents are flying to Boulder to watch me take on the field at Valmont and potentially crash in the sand. Cross season is the best season!