But wait, first…my parents were in town! They flew in Friday night to spend the weekend with me in Colorado and to watch me race on Saturday and to give me the hugs I’ve missed so much. I spent half the weekend entertaining and the other having convincing them they should move to Colorado. Our weather was absolute perfection, so I appreciated that. My mom didn’t get to come to Boulder last year during my first season, so this felt like a big deal. She’s been my number one supporter since forever in anything I’ve ever done, and I had a lot of fun showing her around a new sport and new parts of Colorado.

Anyway, back to that something: last week I upgraded from a category 4 to category 3 cyclocross racer!

I’m not going to say the first two races of the season (Harlow Platts and Blue Sky Velo Cup) were easy, but I won them both and still had gas in the tank when I crossed the finish lines. Since those wins, my friends have been encouraging me to upgrade from category 4 to category 3 (basically: race with a faster group of women). But there’s a points system in place, and you have to race often and place high enough to accrue enough points to move up. It’s takes time. However, there are exceptions, especially if you’re winning races by almost two minutes. You can put in an upgrade request to USA Cycling to be moved up, so I submitted one earlier last week but didn’t hear back.

On Friday, out of curiosity, I checked my license online and whaddya know, USA Cycling upgraded me to a category 3 cyclocross racer. (!!!!!) I had to keep my screams on the inside as I rejoiced and slightly panicked at my desk at work. I still feel brand new to this sport, I have fewer than 10 races under my belt, and I ride a gravel bike for goodness sake…but another part of me knew I earned that spot.

On Saturday morning, I packed my bags, loaded my bike into the car and my parents and I headed to Valmont Bike Park around 6:45 a.m. It was already busy, an event truck blasted the Top 100, teams and mechanics were setting up tents, and a coffee truck rolled in.

I headed straight for the registration tent to pick up my number and timing chip. Then the nerves set in. It always happens when riders start milling about in their fast skinsuits with their slick bikes and fancy team tents. I tried to shake it off as I headed out onto the course to warm up with my usual three laps before the first men’s race at 8 a.m. 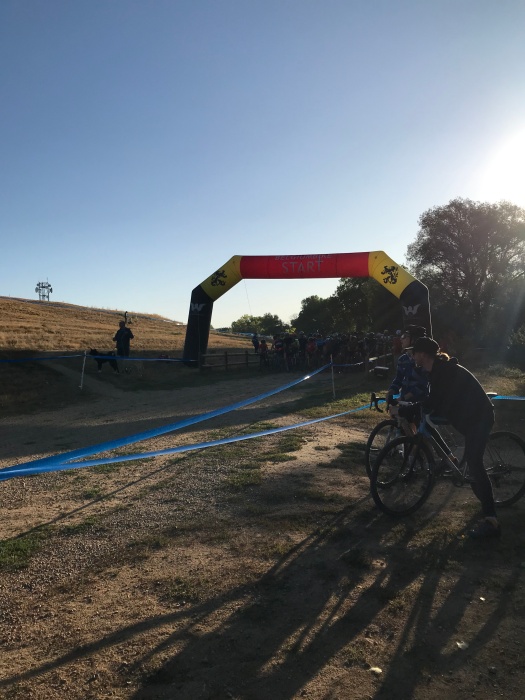 The course was a little bit of what I expected: technical and kinda sandy with stairs and slippery off camber sections. There are a few races each season at Valmont and they change up the course for each one. It’s one of my favorite to race because of the stairs. What a rush throwing a bike over your shoulder and hauling ass up to the top.

When it was finally time to line up, I made my way over to the chute watched the start line slowly fill up with new riders and familiar faces. The official announced, “Thirty seconds!!” I could see my mom move closer to the start with her camera ready. That moment broke through a bit of the nerves for me. She’ll love me if I come first. She’ll love me if I come last. She’ll love me as long as I love what I’m doing. And I did. I’m sure I’ll never be paid to race bikes, so as long as I’m giving it every ounce of everything I have, and have a blast doing it, I’ve won.

^^^ Coming off lap one in the lead. But I eventually lost it on lap two.

When I whistle blew, eleven of us raced out onto the course, leaving a cloud of dust in the wake. Immediately we started climbing, which eventually turned into a slippery, wind-y descent through sand into an off camber section toward a set of stairs. I let the tension out of my shoulders and powered up the side of the hill before dismounting my bike and running up the stairs toward a crowd of people probably just waiting for a wipeout. 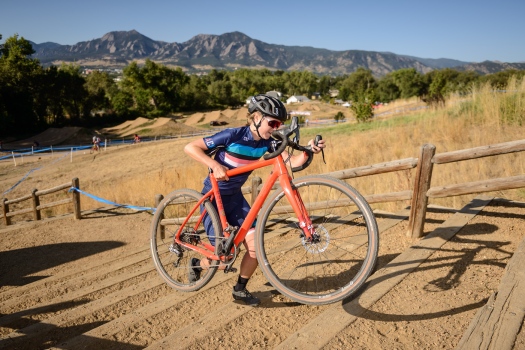 I don’t know how they did it, but my parents were all over the course! Every so often I’d hear my mom and dad yell at me out of nowhere. On the first lap, when I rounded the corner to head over the line, I saw them both standing in the distance with their arms in the air. My mom was in bright pink and easy to spot. I loved that, and it made me race even harder. I fought my way all the way through the field and took the lead on lap one, but slowly lost it over the next three laps. I was bummed, but I kept fighting because I knew another girl was right on my tail waiting for me to mess up…which I did…several times. After one of the more hilarious spills I took in front of a barrier, my mom yelled, “ARE YOU OK!?!!” It was a silly mistake and I was kicking myself for the rest of the race for that one, but I had to laugh because, like, not the time, MOM. 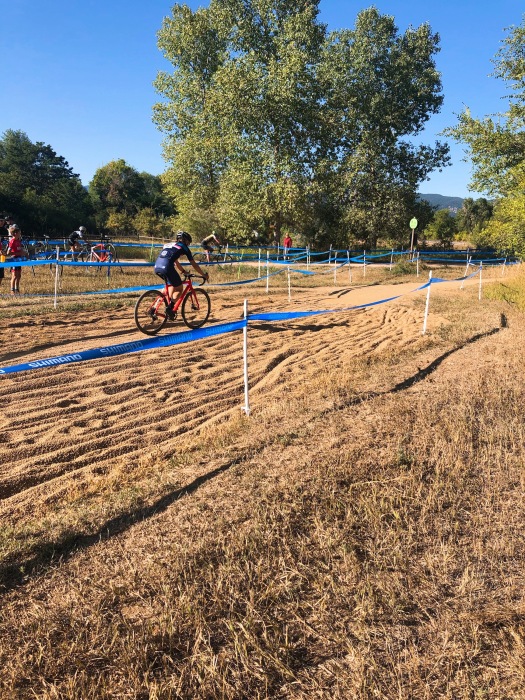 ^^^ The sandpits were pretty tame, and most riders were able to ride through both without getting off the bike.

After laying it all out there on the course, I went home with a second place. I was bummed for not holding the lead, and it’s very clear to me that I need to work on my technical skills. But for my first race as a Cat 3, I was pretty proud. I know there will be so many more in the future, and I can’t wait to keep racing and keep improving.

I chatted with a few friends after the race and did a short cool down before heading to the podium for awards. My one small pet peeve with CX races is that there isn’t a time schedule for podiums, so most people miss them if they’re out on a cool down or not really near the awards area. 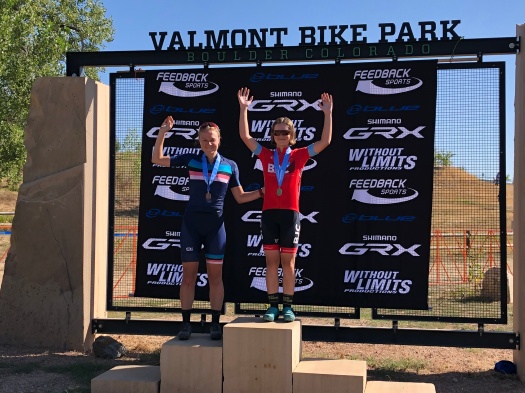 There are two races this coming weekend and, like last time, I’m going to have serious decision fatigue with everything going on. To ease the stress, and go easier on my bank account, I’m thinking of racing one day then heading out on a fun ride with friends. TBD.

Thanks to whoever reads this far. I’m sure these aren’t the most exciting posts, but I like to do them for my memories. Hopefully I’ll be even further along in this sport next year 🙂