Old Man Winter is a running and cycling event held in and around Boulder County in February each year.

It hosts a 10k run on the gravel and pavement roads in Lyons, a 50k ride up in Lyons, and a 100k ride that stretches further into Boulder and the nearby mountain trails.

I’ve never participated in the event because Rapha is a sponsor and one of the hosts, and the last two years I was serving up pre-ride coffee and pastries from the clubhouse to everyone before they headed out into the cold. I didn’t mind, though, because it was fun to send out those brave souls and then welcome them back when they finished.

I have the opportunity to ride this year because I don’t work at Rapha anymore, but the weather is so unpredictable this time of year and the last thing I wanted was to wake up on race morning to snow or brutally cold temps. That would ruin the ride for me, especially with all the descending and slippery snow-packed trails.

Instead, I’m joining some of the training rides that Rapha hosts each weekend to help riders get ready for race day. The past couple have been too long and too fast for me to join, but yesterday’s was short and hilly (and a little snowy).

We had a huge turnout (maybe about 65), so the RCC coordinators created three groups: tempo (FAST), intermediate (quick but not killing it), and social (me!). I knew I would be somewhere in between intermediate and social, and I wasn’t interested in a total smash fest (or getting dropped), so I decided to join the social group and enjoy the day.

Around 9:30 a.m., we headed out in waves towards Linden Dr., the first climb of the day. It’s a paved road north of town that is a couple miles long and can get super steep.

From there we jumped onto Bow Mountain, which is a fun and flowy dirt road that descends to Wagonwheel Rd and the bottom of Olde Stage, which is another long paved climb in North Boulder. I usually do this route the opposite way, so it was nice to switch it up to make it feel like a new ride.

We had several regroup spots and one of them was at the top of Olde Stage. There were lots of different paces within the social group, so we made sure to keep everyone together in case some weren’t sure about the route. 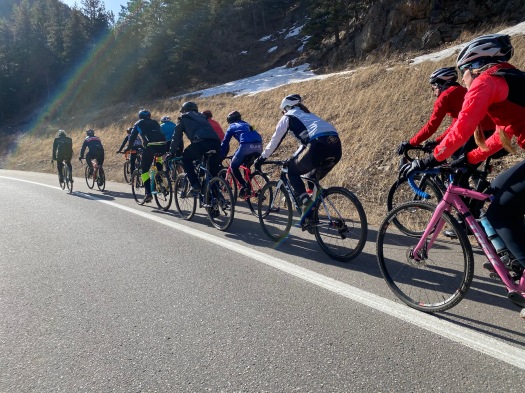 From the top of Olde Stage, we descended to Lefthand Canyon and took a left to start climbing again. Lefthand is a pretty tame climb, never getting too steep in any spots. At one point we were maintaining a very very social pace and I was starting to get antsy to speed up a little bit.

From Lefthand, we hung a left toward Ward. At this point, we had already climbed a couple thousand feet and were continuing to head up toward Rowena, a singletrack gravel trail that connects to Sunshine Canyon.

Rowena, as expected, was mostly covered in packed snow and ice. It doesn’t see too much sunlight, so after we get a couple snows in the winter, it usually stays covered until we hit spring.

I tried to ride as much as I could, but I almost ate it a couple times on the ice when my bike tires slipped out from under me. Not looking to break a hip any time soon, I hiked next to my bike for a majority of the trail, which is a couple miles long. The reward was worth it, though.

At the top, you emerge from the tree cover to a beautiful view of the mountains for as far as you can see. No matter how many times I see it, it still takes my breath away. From there, it was just one long and fun descent back to town on Sunshine Canyon.

We covered about 28 miles with more than 3,600ft of climbing and when we finally pulled back into town, my legs were pretty cooked. I didn’t get in as many miles as I had hoped this weekend, but all the climbing really made up for that and it turned out to be a great training ride.

Can’t wait for the next one!